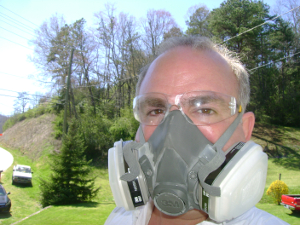 Definition: Effluent is the partially treated waste water that leaves a septic tank. 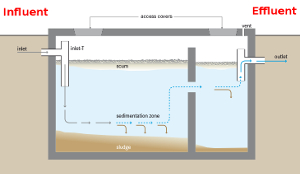 This is opposed to influent which is the toilet paper, poop and toilet water which enters a septic tank.

Early on in my study of septic systems I came across a problem.

The problem is widely known within the septic industry, but rarely known to homeowners.

Until they meet our friend in the industry, big Bill.

Here is the problem.

When you have a larger-type septic system you need two or more drainfield lines in the yard.

Unfortunately, it is very difficult to get an equal amount of effluent into each line.

This often results in one line being overused and subsequently prematurely failing.

Because the line has been recieving twice, three times or even four times the amount of effluent than it was designed to recieve.

And when the county comes out to troubleshoot the problem, they make you install an additional line or even a whole new drainfield to correct the problem.

The solutions which the industry has come up with to the unequal-distribution-of-effluent-problem are many.

The three most common solution are:

2) Use a flow divider or

3) Use a distribution box

Step-down systems are what they are.

Basically, they overload—and slowly ruin, the upper leachfield line before using the next one down the hill.

You fill up the top leachfield line then it overflows—when it stops processing effluent, to the next line.

This method of installation is basically a legal rendition of unequal distribution.

Ewww! Who would want that?!?

Step down systems are commonly used in North Carolina to fix the problem of unequal distribution.

The second option is to use a flow divider.

When talking about this problem one bright and sunny afternoon in Raliegh my North Carolina State University trainer noted, "flow dividers work okay".

I am a therapist by trade and I heard the clear lack of entheuism for the devices in his voice.

So, I nixed that option.

Our third choice is to use a distribution box.

Distribution boxes work well until you cover them up with a shovel full of dirt.

When you place that shovel full of dirt on the top of the distribution box it tilts.

And it only takes a 1/16th of an inch of tilt to send more effluent down one line than all the others.

So we bandaid this micro tilt problem with "speed levelers".

You rotate the dial and horizontially line up the flows to each line.

Levelers basically keep us from having to dig up and reinstall the distribution box to level each time it shifts—they're a short cut.

And speed levelers fix the problem... until you throw a shovel full of dirt on the top of the d-box....

Or until the box settles just a little.

Or until the box is shifted by frost heave again next winter.

The other comment my NCSU trainer made to solve the unequal distribution problem was a little known and rarely used type of distribution box with a tilting pan inside.

He said to our group on that same beautiful afternoon, "tipping distribution boxes work excellently! And we have the only one in the State."

So my quest was on, I decided to get a tipping distribution box. 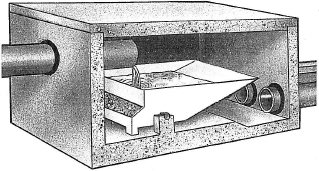 The next image is a sideview diagram of the box in action (courtesy of the State of North Carolina's Onsite Wastewater Guidance Manual). 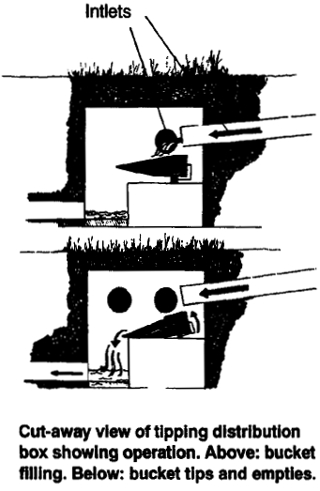 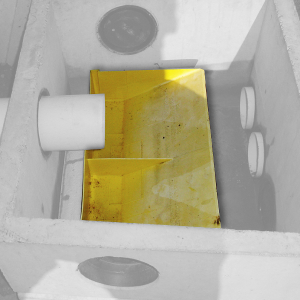 The plastic tipping (a.k.a. dipping) trough is made by the most excellent company Polyok.

It is an old school septic device.

One usually only sees this in wastewater research centers and septic education and training facilities.

After a bit of Googling I decided to make my own.

It was either that, ship one in, or drive to New England or out West to buy one.

I aquired a distribution box from a local concrete company and bought flexible PVC fittings from a local plumbing supply store. 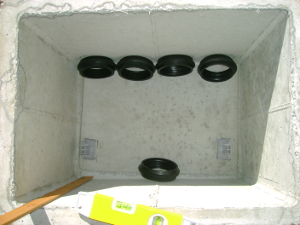 Then I had McNeelys Store & Rental in Sylva special order the tipper from Polylok. 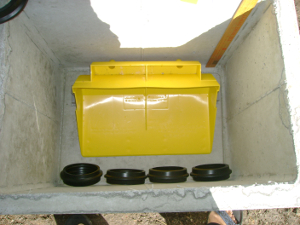 I drilled holes and epoxied bolts to the bottom of the d-box then fabricated a styrofoam form to help mold a new concrete shelf upon which to place the tipper. 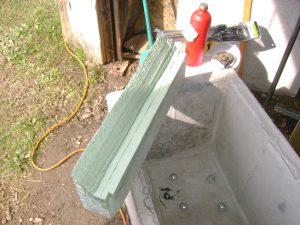 The bolts will secure the new concrete shelf when it is poured. 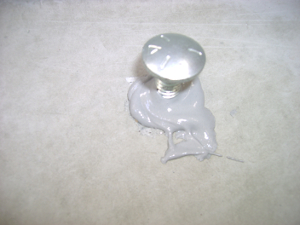 Not being one to do things poorly, I wanted to eliminate any chance of corrosion in my new concrete slab.

You do this by using reinforced concrete.

The stronger your concrete, the more it resists the small amounts of sulfuric acid (H2SO4) which are formed in septic tanks.

When poop breaks down it offgases and creates hydrogen sulfide (H2S).

Hydrogen sulfide then combines with water and oxygen and turns into a very weak solution of sulfuric acid.

That is why you have to replace distribution boxes about every 20 to 25 years.

And your tanks every 30 to 50 years (regulations force manufacturers to build them stronger than d-boxes).

Ahhh! The magic of chemistry.

Here is my new reinforced concrete shelf poured with the tipper mounts in place. 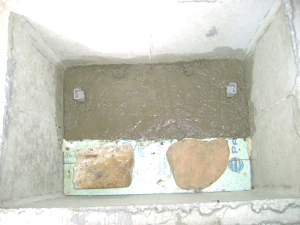